History of the University

The first Poznan academic school, known as the Lubransky Academy 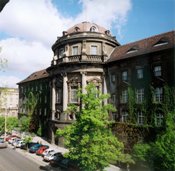 was created in 1519. Four hundred years later, a university in Poznan, called the Piast University, was founded. Its name derived from the first Polish royal dynasty.

In the time between the two world wars, the level of instruction in medicine, pharmacy and dentistry at Poznan University was very high. With the outbreak of the Second World War in 1939 Poznan University was closed and remained so for the duration of the war. However, its professors did not cease teaching. In 1940 an underground University of Western Poland was formed in Warsaw. It comprised the Faculties of Medicine, Pharmacy and Dentistry. In 1941, the Polish School of Medicine at the University of Edinburgh was founded. Its first Dean was Professor Antoni Jurasz of Poznan University, an eminent surgeon. In the final months of the war, during the last battles for the city of Poznan, preparations were being made for the reopening of the University and teaching was resumed in April 1945.

In 1950, the Medical Faculty with the division of Dentistry and the Faculty of Pharmacy were detached to form an independent school - the University of Medical Sciences in Poznan.

In 1975, a new Faculty of Nursing and in 1979, the Division of Laboratory Medicine were founded. In 1984, The Polish Parliament (Sejm) conferred upon the University its name KAROL MARCINKOWSKI UNIVERSITY OF MEDICAL SCIENCES in Poznan in memory of Doctor Marcinkowski (1800-1846), a distinguished Polish physician and patriot of the first half of the 19th century who became a symbol of the highest professional and moral values in medicine.

In 1992, the Faculty of Medicine was divided, with Faculty I being responsible for the 6-year Polish M.D. Programme and Faculty II comprising the Divisions of Dentistry, Post Graduate Medical Education and Medicine and Dentistry with English as the teaching language.

Our present official name in English is: POZNAN UNIVERSITY OF MEDICAL SCIENCES.